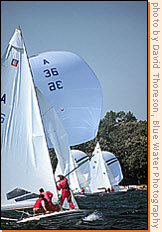 At Stauss Realty, we’re proud to say we have over 60 years’ experience in the area and a deep understanding of the region’s history, culture, and people. Here you can learn more about the lakes.

Origin of the Iowa Great Lakes Names and Lakes Data
The beautiful chain of lakes, in Northwestern Iowa, (Dickinson County) extends from the Minnesota line Southwest several miles and covers about fifteen thousand acres. The largest of the lakes is now known as:

Big Spirit Lake
It was called "Minnewaukon" by the Native Americans, and "Lac D' Esprit" by French woodsmen which translates into "Lake of the Spirits". According to various Native American legends, this lake was believed to be under guardian watch by an evil spirit. No Dakotah ever dared to cross it in his canoe and no Native American canoes were ever found by early settlers in the vicinity of this lake. Whether there are demons that dwell in the lake or not, the waters of Big Spirit Lake are never quiet. The lake covers 5,684 acres and is the largest natural lake in Iowa.

East Okoboji
Begins at the foot of Big Spirit Lake, from which it is separated by a narrow isthmus, and runs south for approximately sixteen miles. The Native Americans called the lake "Okoboozhy", and the name is presumed to mean "Reeds and Rushes", and the lake was once surrounded by them. It has the appearance of a river rather than a lake and is the longest natural lake in Iowa. This lake covers 1,800 acres.

West Okoboji
It’s the second largest lake in the chain and covers 3,850 acres. West Okoboji is a glacial lake created by the Wisconsin Glacier 14,000 years ago and has a maximum depth of 136 feet which makes it the deepest natural lake in Iowa. Subterranean springs help provide the cool, clear, blue water of Iowa's most popular lake. The lake was originally called "Minnetonka" by the Sioux Tribe and translated into "Great Waters". Our first settlers decided to use a version of the name "Okoboozhy" for both lakes known today as the "Okoboji" lakes.

Thermocline
The thermocline is unique to deep water, fresh water lakes. The water on the top 40-45' of the lake changes temperature with the seasons. It reaches 75 degrees in July while the water in the lower level only warms to a maximum of 45 degrees. In the fall the upper level water cools to below 45 degrees. It is then heavier and denser than the water that has remained beneath it all summer. The water on top sinks and the water on bottom rises and the lake turns over. This event is seldom observed but you might see the debris brought up from the bottom for several days. The water below the thermocline layer is a dead zone. It is pitch black, cold, with no plant life, and few fish live there. During the winter the lake has no stratification and all levels stay at 39.2 degrees.

Blue Water Lake
West Okoboji is often considered to be one of three blue water lakes in the world. The other two are Lake Geneva in Switzerland and Lake Louise in Canada. It is mentioned that this fact was stated in National Geographic many years ago. Late 1890s Iowa State Geological texts speak of the "blue water" of West Okoboji. West Okoboji is a glacial lake, created by the Wisconsin Glacier nearly 14,000 years ago with a maximum depth of 136 feet. The lake is located on nearly the highest point of land in Iowa and little runoff water enters West Okoboji. Deep water springs provide much of the cool clear blue water. West Okoboji is actually a blue water lake because it is clear and deep and when the sun shines and the sky is blue, the skies blue color is reflected by the lake. It is also said that West Okoboji has a particular blue/green algae that helps give the lake its blue color. Either way, West Okoboji is a natural glacial blue water lake; a stunning contrast to our Iowa prairie surroundings. 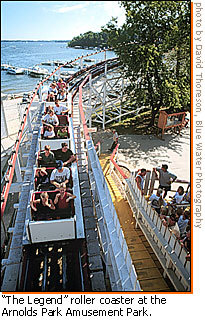 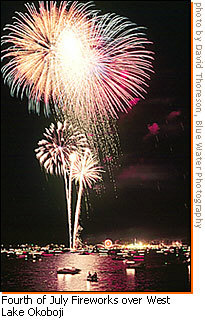